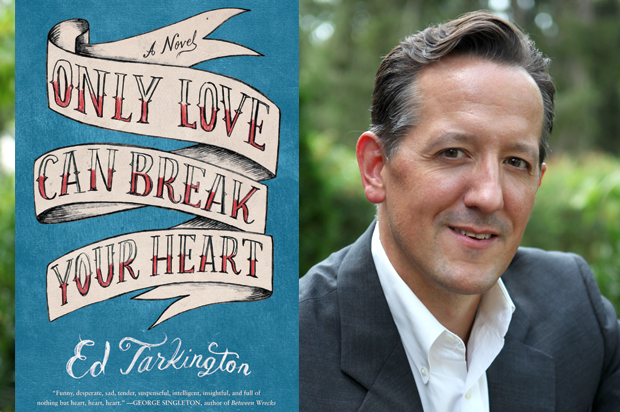 In his first published novel, Ed Tarkington stayed close to his roots and wrote about those things he holds dear.

It was one of February’s selection for Book of the Month – quite a coup for a debut novel.

Social media is full of praise, with many readers posting that, once they opened the book, they couldn’t put it down.

“That’s what I was going for,” Tarkington said in a phone interview from his home in East Nashville. “It took me two years to write it, but it’s OK that it only took you two nights to read it.”

From the opening paragraph we know this story will bring us into the world of the dysfunctional Askew family:

Paul was my half brother. But I never called him that. This was partially out of loyalty – for I remained devoted to him, despite everything – but mostly because it didn’t seem quite enough, having only half of one brother. So I never thought of him that way.

What is not immediately apparent, however, is the way Tarkington, who has a Ph.D. in creative writing from Florida State University, brings back the coming-of-age genre with a glorious story of eight-year-old Richard “Rocky” and his brother Paul, 16.

The boys live with their father and Rocky’s mother in Spencerville, Virginia, a hamlet Tarkington modeled after Lynchburg, Virginia, his home town.

“It’s the home of Liberty University now, with about 70,000 people,” Tarkington noted. “When I was growing up, it was much smaller.”

Tarkington used two events from his childhood as the foundation for his story.

The origin of “Only Love Can Break Your Heart” dates back to 1978, when my half-sister – I’ll call her Caroline – stole my six-year-old sister out of her sickbed and disappeared.

No spoilers here, but in the book, Paul absconds with Rocky.

He checks Rocky out of school, and takes him along on a joy ride to a nearby college to visit Leigh Bowman, his fragile girlfriend, then drives to a place called John’s Gap, deep in the forest on the Blue Ridge Parkway, leaving a terrified Rocky to face the night alone.

Only later does Rocky find out the motivation behind his big brother’s cruel behavior.

Shortly after this harrowing incident, Paul and Leigh disappear, blowing their families apart.

“When you’re angry and jealous and vengeful, you do things you wouldn’t normally do,” Tarkington said, speaking about Paul. “People do terrible things without thinking about them. Rarely in life do you get a chance to take it back.”

Music plays an important role in this book.

To avoid confusion, Tarkington lifted the title from the 1970s Neil Young hit, not the 1962 ballad recorded by the late Gene Pitney.

The Doobie Brothers, Crosby, Stills, Nash and Young, The Rolling Stones and others provide a sound track for the action, especially when the boys are in Paul’s room with his friends and their girls, or cruising around in his cool car.

Tarkington, who teaches English and coaches wrestling at an all-boys high school in West Nashville, said he turned another event from his childhood into a plot for the novel.

In April of 1985, real-life couple Derek and Nancy Haysom were brutally slain in their Lynchburg home. He remembers watching the trial in the basement at a friend’s house.

Although Tarkington used the double homicide in his book, he had no idea anyone else was following the case.

“In November, as we were gearing up and I was going out to do pre-pub date stuff, The New Yorker ran a big article about the case,” Tarkington noted.

In the novel, the doomed couple become Brad and Jane Culver, globetrotting millionaires.

Jane has roots in Lynchburg.

The Culvers purchase and renovate a historic Lynchburg mansion just up the hill from Rocky and Paul’s home.

The mansion has a long and storied history of its own, some of it involving the brothers and Brad Culver.

With his brother gone, there’s no one to provide Rocky with a moral compass and his life goes completely off the rails when he’s hired as a stable boy by the Culver’s 29-year-old daughter, Patricia.

By involving Rocky with the Culvers, Tarkington puts the vulnerable – and hormonal – young man square in the plot’s tragic cross hairs.

The beauty of this book lies in Tarkington’s ability to weave so many threads – coming of age, lost love, murder, madness – into such a glorious finished product.

Tarkington admits learning some valuable lessons from his first attempt at writing a novel. The book “flopped,” but he obviously figured out what went wrong.

Set in the drug culture of Northern New Mexico, Tarkington said, “It wasn’t authentic to my personality. I don’t live in a cabin.”

He also realized he needed to write something for people who read novels, not a book for “writers who read to try and learn how to write better.”

He knew he had to stop worrying about what he thought people would like and start writing what he knew, even if the coming of age story had been done a thousand times.

“I had to accept I wasn’t doing anything that had never been done before,” he admitted. “But that was the story I had to tell. It was the one in my imagination – the stuff that kinda hung on in my head.”

Tarkington has a two-book deal with Algonquin and is at work on his sophomore release.

“Algonquin has done an incredible job for me,” he said. “I’m loyal. I’m delighted they want to do it again.”

His handlers say he’s different from others in this regard, but he explains that he “listens and tries to accept constructive feedback. I know they’re not just telling me stuff to hear themselves talk.”

He credits solid guidance from his agent, Gail Hochman, and editor, Andra Miller, for helping him make the book the best it could be. He has put “full faith” in them, practicing what he preaches to his students.

“I tell my boys that I’m not lecturing them just to feel important,” he said. “I say, ‘I have a little bit more knowledge and experience than you at this point and I’m trying to help you get better.’”

Tarkington rises at 3:30 each morning and begins writing at 4 a.m. in the East Nashville home he shares with his wife and two children.

He says his late father would get a good laugh out of his early hours because Tarkington loved to sleep late when he was a youngster.

“I really learned how to do this [rise early] by coaching wrestling,” he explained. “We’re coaching at a tournament and it runs over until midnight or 1 a.m. And we have to be back at the tournament the next morning at 7. You learn how to get tough and just do it because that’s what you have to do.”

The soft-spoken writer then lightens up.

As for the future, Tarkington plans to continue teaching.

“If I didn’t have the habits I’ve developed from being a teacher and if I didn’t have the kids, I don’t know if I would have gotten good enough at it [writing],” he explained. “When you’re talking about a story with a bunch of high school kids, you talk about what really matters. They remind me why people write. They are amazing kids.”

In addition to being grateful for his students, Tarkington took a moment to explain why his school is extraordinary.

“I’m in the middle of the school year in the beginning of the second semester and I’m going out on the road all the time,” he said. “Obviously, I’m working at a place that gives me a lot of support to let me do that.”

Writing is a solitary job. Promoting a new book forces a writer to go out into the world, traveling and making a lot of book store appearances.

While he’s not totally comfortable in front of a crowd of strangers, Tarkington is OK with touring to promote the book.

“I will do whatever I can to reach out to people and be available,” he stated. “I’m really proud of this book and everything I’m doing is out of respect for the people at Algonquin and for the book. I’m trying to do what I can to get it to its audience.”

Tarkington thinks his book will find its place in the crowded coming-of-age genre.

“I hope what maybe gives it a bit of uniqueness is just really that it’s from the heart,” he said in conclusion. “I hope that’s part of what makes it work.”

To learn more about the real-life murder in Tarkington’s hometown of Lynchburg, VA, visit

One thought on “A new Southern voice emerges”