Author Ruth Ware made quite a splash with her debut novel, “Dark, Dark Wood,” the story about a bachelorette party set in the English countryside that goes horribly bad.She has followed it up with The New York Times best selling “The Woman in Cabin 10,” (Galley/Scout Press) a tight psychological mystery that will keep you guessing until the final page.

Just days before travel writer Laura “Lo” Blalock is set to sail the North Sea on the luxury yacht, Aurora, she is robbed at her London flat, leaving her shaken and unable to sleep.

After a bizarre, middle-of-the-night trek through the city  to her boyfriend’s flat, Lo leaves the city for the cruise.

Lo has been invited on the Aurora’s maiden voyage, along with several guests, by Lord Bullmer and his rich, reclusive  wife, Anne. Bullmer hopes to attract the travel world’s elite to his exclusive boat.

In exchange for her passage, Lo will review the experience for Velocity, the magazine where she works.

After being checked into her room, Lo borrows a tube of mascara from her neighbor in cabin 10 in an attempt to hide the fatigue that has suddenly shown up on her face.

When she goes topside for dinner, Lo finds the boat beautifully appointed with no detail left unattended. The food is delicious. The service is personal and impeccable. Everyone is sparkly and bright.

However, something is a bubble off plumb in Lo’s world. Still unsettled by the burglary, she is further undone by a run-in with former boyfriend, Ben, a fellow guest, who tries to take advantage of her off-kilter situation.

Lo drinks a little too much and downs a few anti-depressants to take the edge off.

Sometime during the middle of the night, her mind muddled by chemicals and alcohol, Lo wakes up, hears a splash and sees a smear of blood on the glass between her deck and the deck of cabin 10.

She reports the incident to the ship’s security officer, only to discover no one was booked the adjacent stateroom. There’s no evidence of blood anywhere in the immaculate space, leaving Lo to wonder if she dreamed the encounter, the mascara and the bloody body hitting the water.

Ware takes her readers through a lot of twists and turns before the mystery of the woman in cabin 10 is resolved,  and it’s hard not to get emotionally vested in Lo’s situation.

Why won’t anyone believe there was a stowaway on the boat who met a bad end?

Could the combination of anxiety, depression and an ever-growing paranoia push Lo to the breaking point?

Is she being set up as a patsy for a crime she didn’t commit?

And, finally, will she survive?

Interspersed between Lo’s misadventures are frantic emails between Judah, her loyal boyfriend, her friends and her mom, who are trying their best to figure out why she won’t answer texts.

When a body washes up on shore wearing Lo’s clothes, it seems all is lost. But, this is a mystery and things are never quite a simple as they first appear.

Ware plays her cards close to the vest and it isn’t until the last page that she plays her hand and our hearts began to beat at a normal rate again.

Critics are comparing Ware’s book to works by Agatha Christie, but she seems closer to Tana French in her ability to keep her readers as off-kilter as her heroine. I look forward to reading more of her work. 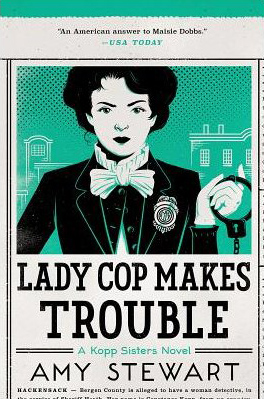 The Kopp sisters include Constance, Norma who raises pigeons and stays out of the press, and the young Fluerette, an aspiring actress.

After impressing Sheriff Robert Heath with her bravery in the first book, “Girl Waits With Gun,” Constance is hired as one the country’s first female deputies.

Not very long after getting the job, she makes a rookie mistake, leaving the sheriff and his department open to harsh criticism.

“Lady Cop Makes Trouble” deals mostly with the search for Herman Albert von Matthesius, a German con man who escapes captivity by feigning an illness so convincingly that he earns a trip to the hospital.

While there, he slips out on Constance’s watch during chaos created after a train wreck.

In those days, if a fugitive escaped, the sheriff could be held accountable, even jailed. Embarrassed by her lapse in judgment and determined to keep her boss out of the clinker, Constance doggedly tracks Matthesius, following every lead she can find.

While I thoroughly enjoyed “Girl Waits With Gun,” I found the second book in the series a little slow going. There are a couple of back stories, including the young Fleurette’s forays into the theater and a domestic abuse case, that provide some relief, but mostly, the plot lags before things sort themselves out.

Hopefully, Constance will get a better set of circumstances in the third and final installment, set in 1916.

According to press materials released with this book, the author says, “When the third books starts – wow. Constance has really found her groove. It’s so much fun to see what she’s capable of once she has the chance.”