Author Jim Ainsworth got his first horse when he was 10. He grew up on a Delta County dairy farm that also produced cotton, so it stands to reason he would need a ride while helping out with chores.

He spent a lot of his young life seeing the world from the back of a horse. He worked stock with his father and older brother until the farm failed. The family moved west to the small town of Adrian, where his parents had family and where his father found work on a ranch.

Again, Jim and his horse were needed, but he also found time to enter roping competitions, throwing his way to several championships that earned him two saddles and five buckles, something to pass down to each of his seven grandchildren.

He sold his favorite horse several years ago.

“I still can’t talk about it without crying,” he said during a lunch interview last week. “I have another one, but I’m a fair weather rider now. In this heat, I just don’t enjoy it. After team roping and major trail rides, it’s a little boring just riding the roads or around the place.”

The place is the Bar None Ranch, a 10-acre spread near Campbell he shares with wife, Jan, an accomplished quilter.

He developed a close bond with English professor Dr. Fred Tarpley, who encouraged his writing talent, but Ainsworth knew he needed a steady income, so he became a certified public accountant and a well-known financial advisor.

He also owned a western clothing store for a while.

Ainsworth was 28 when his father died.

At the funeral, Ainsworth realized the preacher hadn’t really said anything personal about his father, a man who loved to tell stories. He always regretted that.

After the funeral, people told him that when a man like his father died, “a library burns down.”

After leaving the financial world and settling down on the Bar None, Ainsworth decided the time was right to start telling his family’s stories. 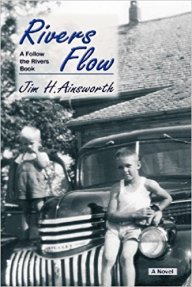 “Basically, all the books tell my life story,” Ainsworth stated.

The stories are told through the eyes of Jake, who comes of age during the family’s unsuccessful struggle against drought and bad luck, eventually forcing them to move to Adrian, on Route 66 near Amarillo.

They relocate to West Texas, where everyone, including Jake, works to adjust to a life very different than the one they had in East Texas.

In the book and its sequels, “Rivers Crossing,” “Rivers Ebb,” and “Go Down Looking,” readers follow the ups and downs of the Rivers family.

“Home Light Burning,” is the prequel to the Rivers series. It was published in 2010.

Ainsworth, now 72, also released “River of Stories,” a collection of tales from 70 years of living that also includes, finally, a eulogy for his father and one for Dr. Tarpley, who died in 2014. Tarpley and Ainsworth developed a close friendship with Tarpley serving as editor for some of Ainsworth’s first work.

In March of this year, Ainsworth released “Circle of Hurt” and “Believing in a Grand Thing.”

“Circle of Hurt” is about a group of friends who meet regularly in the small North Texas town of Riverby.

The rules of the group are: You have to have inflicted hurt or been hurt seriously to be a member, Ainsworth explained.

“Believing in a Grand Thing” is Ainsworth’s personal story of faith.

After the March launch, Ainsworth took some time off from writing to take care of his “real life.” However, in the past few days, he’s been inspired.

“I’ve had some ideas,” he said. “I’ve written some scenes. A lot of things happen in small towns that you just can’t make up. I’ve got a list.”

That list includes the murder of a high school classmate and the strange life of one of his graduating class who earned a Rhodes Scholarship, but ended up living with his parents, 38 dogs, two lions, two tigers and two elephants.

“There’s a story there,” Ainsworth concluded.

And Ainsworth’s the man to tell it.